I've had a dream for as long as I can remember; one of those kinds of dreams that you never think will actually happen, and you tuck in a box under your bed, but you keep harboring a distant hope that one day maybe it'll happen.

I realized that waiting around and hoping doesn't do jack squat, and if you want something, you gotta grab life by the horns and make it happen. So I have started to do just that. And what is this crazy dream of mine? To be a cheese maker. Cheese has always interested me. Not the tasteless processed blocks of crap that you find in American supermarkets, rather artisan and traditionally made cheeses. Even if you eat the same cheese by the same cheese maker who uses the same animals for every cheese, it'll always taste just a little different. Or a lot different, sometimes. It's always a mystery, as you never know exactly what you are getting, but it is bound to be exciting.

Cheese is an adventure for my senses, and I would love to be able to learn how to create that mystery.

I realized that NOW is the time for me to grab that milking cow by its tits, so to say, as I am living in Italy, in a house that is connected to a calf barn (I can hear their tinkling cow bells all day long even from inside my house!), and across the field from us is a really fantastic dairy. So yes, now is the time. When I was in the US, I found a 'Cheese Making for Idiots' book in a local bookstore, as I figured I didn't know nothin' about making cheese, and brought it back to Italy with me. For once in my life, I am trying to (mostly) follow directions, and the books says to do the recipes in order, so as to learn the right techniques, so I am doing just that, and will regale you with the extraordinary tales of my new life as a beginning cheese maker. I won't give directions as to how to do everything, because there are a lot of details and I don't want anyone to take what I say as a full explanation as to how to do something and now realize I skipped all the boring sanitation details and have you get sick. So, go learn to make cheese too, but make sure you do it safely.

First, you gotta know where I get my milk, as it is pretty awesome. It's possible I've mentioned it before, but it is so cool it deserves a reminder. There is that dairy down across the cow field, and there is a freaking VENDING MACHINE for raw milk, and another for dairy products like butter, yogurt, and various cheeses they make. It is right outside the barn. It's straight from the cow, not homogenized, not pasteurized, just kept cold til I stick in my euro coin, put by milk bottle under the spout, and press the button. And voila! A liter of tasty, fresh milk comes out. It's pretty strong tasting now, as the cows just came down from their summer holiday eating the tender grass at the top of the Alps that makes them produce milk with a particular flavor which gives Fontina (the real stuff, not the fake Fontina sold outside of this region) it's particular flavor. 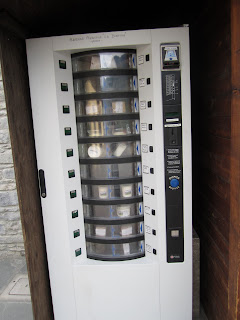 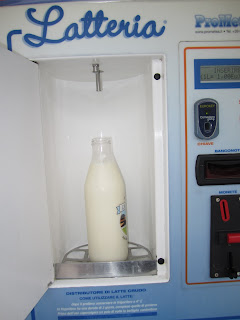 First, I will admit that I accidently destroyed the first batch. Ya see, the way you make yogurt is first you pasteurize your milk (if milk is raw), then when it cools down to be luke warm you stir in a serving's worth of plain yogurt with live active cultures. Got both the milk and the starter yogurt from the vending machine. Then, you cover your stainless steel bowl that you heated up the milk in with plastic wrap and stick in a turned off oven (to keep it at a stable temperature) for about 12 hours. Then, voila! You have super tasty yogurt. Unfortunately, after about 12 hours I forgot about the yogurt and turned on the oven to make dinner, and ended up instead with a yogurt and melted plastic mess. However, the next time I made it, it was devine. We have since started making the yogurt using 'real' cultures, and it is also very tasty.

This was my first real-ish cheese. It's a direct-acidification cheese, and the curds are separated from the whey using lemon juice that is added while heating the milk over a double boiler. I then separated the curds from the whey using a cheese cloth, letting it drip out for an hour or so, and the curds into a patty and compressed it for a while. I ended up with a soft cheese that I could cut into blocks, without much taste, and sort of like tofu. It browns up nicely in a pan, and is a fantastic addition to traditional Indian recipes like Saag Paneer, which I made. I don't think this is a cheese I will make unless I am making Indian food... I suppose that makes sense, as it is an Indian cheese. But wowza, what a difference a little bit of salt makes in some cheese, to make it taste cheesey. This was an unsalted cheese.

I must admit, I am a Mexican food addict, and it greatly saddens me to live in a country where it is hard to find proper ingredients to cook tasty Mexican food at home. I have brought over masa harina, mole sauce, tomatillo sauce, good black beans, dried peppers, and other such things from the US, but one thing I didn't have was the CHEESE.

Luckily, the next step in my book was this Latin American cheese. The process is similar to the last cheese (it is made my direct acidification), but with quite different results. Heat the milk to 90.5 C, added apple cidar vinegar, and waited for the curds to separate out. For some reason they didn't separate out so much, so after I took out the curds that formed, I added more vinegar to get more curds out, which worked just fine. Salted the curds with flaked salt, put them in a cheese cloth, and let them hang & drain from the sink faucet for an hour until about all the liquid was gone. The result was something very much like real queso fresco, except that the milk is so strong tasting that it makes the cheese taste strong, as well. It had a good consistancy, melted perfectly, tasted tasty, and was a perfect addition to a devine meal that I made of vegetarian tamales.

Next adventures in cheese making: Mozzerella and Ricotta!
Posted by Annie