Wine, Music, and Cheese IN A CAVE

There is a fabulous thing in Italy, really and truly magnificent.  It's called 'Cantine Aperte.'  It translates into English as 'open cantine.'  Generally, you pay a small amount as entrance (5-8 euros, depending on the event), they give you a glass, and you get to go buck wild tasting as many wines as you want in as many places as you want.  They also let you stuff yourself silly with traditional foods that are supplied aplenty, while listening to rollicking traditional music.  That's the general gist of it.

I'm a physicist, so let me provide you with this simple equation to make understanding easier:

Wine cellars opening doors+wine glass+food+music+good company=good time
This was the second one I've been to.  The first one was right before my wedding, and took place at all of the fancy-pants (AKA delicious) vineyards near my house.  The cool thing about this is they gave you a thing to hang your fancy-pants wine glass around your neck.

Now, this one I'm writing about today wasn't fancy-pants.  It was a big freakin' party in the streets of a small town called Donnas.  It's in the southern part of the valley, and a cute little town where they make really fantastic wine.  Donnas wine.  It costs a pretty penny in the US if you can manage to find it.  As one of the few fiddlers in the region and part of the traditional music scene here, I was lucky enough to get to play in one of the open cantines.  I think it might have actually been someone's personal wine cellar, I'm not really sure.  We hauled our instruments through the streets, and entered through the back door, with a special knock, to where a bunch of little Italian ladies were busily preparing  'Zuppa alla Valpellinense' (or if you prefer it patois, the regional dialect, 'Seupa a la Valpelinentze').  It is a funny sort of  cabbage soup that is topped with bread and Fontina cheese that is baked in the oven.  It's quite tasty.  They prepared huge sheets of it for the hundreds of wine-heads pouring through the door and milling in the streets.

After eating and drinking an appropriate amount of local wine, we launched into playing.  There was another fiddler, upright bass, button accordion, piano accordion, mandolin, guitar, percussion, bagpipe, whistle, and my husband on the banjo.  We were squished together, quite literally, and I kept poking folks in the nose with my bow.  It was a little wine cellar with arched stone ceilings, and we were perched together wherever we could squeeze ourselves, while locals likewise squished themselves together while drinking vin brule (hot mulled wine).  It was a pretty great time. 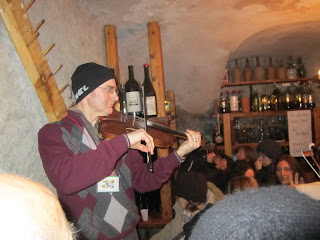 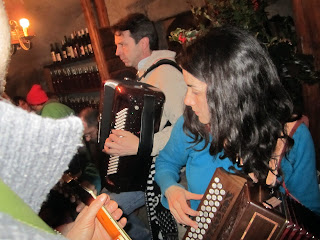 However, we eventually decided to take the party elsewhere.  We played randomly in the streets, until we stumbled upon the best thing ever.  Seriously.

Yes, a cave.  In the center of town.  It had an entrance a bit like any other building in an alley way, except it opened into a real cave.  I don't think it was dug out or anything, I think it was just there and they build this village around it, and others, thousands of years ago (not kidding...2000 years would be pretty accurate).  But this cave was way more awesome than your average cave.  It not only had hundreds of bottles of wine ready for everyone to drink, but some GIANT cheeses, waiting for us to eat.  Like, man-size cheeses.  Anyways, we marched in there, hopped up on some big rocks, and started playing our guts out amid the drunk and merry locals, man-sized-cheese, and endless bottles of wine.  It turns out that caves have incredible acoustics.

Not content to leave well-enough alone, I was recruited on the street to join a band that was in search for a fiddler.  They asked me if I played 'populare' music.  I translated that as 'pop' music, so I responded that I used to play in some classic rock and punk bands as a teenager.  They looked at me like I was a bit crazy.  They proceeded to start playing some music that sounded a bit like some kind of traditional music, and people started dancing what looked to be some kind of traditional dance.  It was simple enough, so I played along and jumped around while doing so, as I'm prone to do.  I found out later that 'populare' means traditional music.  Apparently they play traditional southern Italian music...so no wonder they thought I was a bit crazy when I told them I used to play in a punk band when they asked me if I played their music!

But, yes.  If you can go to a cantine aperte, do so.  Especially if you get to party in a cave.
Posted by Annie