Operation Cheese Making Part Something: I AM A CHEESE MAKING APPRENTINCE!

It's been a while since I've posted about my cheese adventures.  Ricotta salata, ricotta, queso blanco, panir, and cottage cheese have become a nearly daily operation, so that's quite good. 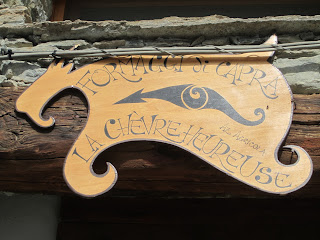 However, it all changed today.  As of today, I am a cheese apprentice, at La Chevre Heureuse.  It is a young couple who owns a farm literally on the top of a mountain, at 1600 meters, and they have somewhere between 40 and 80 goats (they aren't sure of the number at the moment), and about 5 cows.  The husband, Reuban, works with the animals, while the wife, Roberta, makes the cheese (Ok, they aren't technically married, as most Italians these days don't actually get married, but it's shorter to write husband/wife than what it actually is). This morning I headed up there at 8 am and had to pass through some pretty scary streets... not only roads that curve back on themselves every couple of meters, steep, snowy, narrow, and without guard rails (12 km of that!), the streets that passed through some of the villages along the way were precisely the same size as the car.  Luckily, I've learned to drive like an Italian, so that didn't present much of a problem.
I arrived, and was greeted by a couple of friendly dogs and a beautiful pet grey wolf.  I joined the family, including their two adorable small children, in their farmhouse for coffee before kicking off the day.  Reuban took off towards the barn, and I headed down to the cheese making room under the house.  Basically a room has metal work surfaces, a big sink, cheese drying area, and refrigerator, with a gas burner on the floor, on top of which was perched an enormous copper caldron of milk.  Specifically, a combo of freshly-milked goat and cow milk, after it had the rennet in it for an hour to get the gel set.  They do a lot of goat/cow mixes because you get the best of both worlds with that.  The tangy taste of the goat milk, but the added cow milk makes the curds easier to work with.  Goat milk curds are extremely delicate, and are basically a pain in the butt.
This was my first time participating in 'real' cheese making, and I learned a lot.  One really cool thing is that when the goats & cows graze a lot once the grass and herbs start sprouting (since they live at such a high, snowy altitute, they have to keep the animals in much of the year), the unpasterized milk doesn't require any added cultures, because it has them already in it from what they've been eating.  Also, the milk doesn't even really need rennet some of the time!  If you leave the raw milk sitting for a while, it'll gel itself and turn itself into curds without any additional work/ingredients to make that happen.  So basically, milk made from happy, mountain grazing animals=easy, tasty cheese.  Also, unless they want to do something different, they don't need to add bacteria to the cheese to make the rind, which is something pretty much everyone has to do.  Why don't they?  Because they have a cheese cave...not something called a cave, but an honest-to-God cave...that has all the right bacteria floating around.  The cheese rounds dry out for a day, then are put in the fridge for 2 days, and then put in the cave, where the get infused with the right strains of Penicillium and other important bacterium to make the fresh cheese turn into aged cheese.  So basically, they produce a limited selection of cheeses, because they are working with what their milk and cave is telling them.  Pretty cool, I think.

So, I got to help make tomini (little creamy fresh cheeses that are great with jam), tometta (goat/cow mix that gets aged, and they often roll it in herbs. AMAZING), and robiola (fresh, mild cheese).  For the tomini, all I did was help put them into molds since the curds were ready, but I got to help with the tometta from the beginning.  That was the one that was in the big copper caldon. The rennet (and mesophilic culture, if using) have to sit for an hour or so in the warm milk, until the whole thing has turned to gel.  Then we cut the curds, and stirred it while it was heated to the right temperature, and then it had to sit for a while.  Until the right temp was reached, we had to be really careful to not break the curds while stirring.  Then, we spooned them into big molds, put big rock weights on top, and periodically flipped the cheeses in their molds.  After being flipped a few times, they are left until the next day with the weights on them, after which they are removed and put out to dry for a day.  Then the fridge for 48 hours, then the cave for 1-3 months.  Ta da! Cheese!

The robiola was pretty interesting.  The cultured/renneted milk is left to sit for a day in big tubs, and then it is gently spooned into molds.  After sitting in the molds for a couple of hours, the are weighted, and flipped like the others, and also dried out a little bit.  There are fresh and slightly aged versions of this cheese.  I got to bring home a fresh one :).

Other highlights:  the little 2 year old daughter came in and helped us make cheese,  she likes to run by and grab hot curds from the pot while we are stirring, and also to help put the weights on the cheese.  After we finished with the cheese, I helped muck out goat stalls, where I met someone working there who is a wood worker who is learning to play the fiddle.  We agreed to exchange woodworking (one of my other dreams!) for fiddle lessons.  We then all ate lunch together, and another local friend was there, Stefano.  He whipped up some pasta for everyone, and it turns out he is a Michelin Star chef and runs one of the best restaurants in the region.  I left with an invitation to come work there (that is another great adventure... will post about that at a later time), in addition to the open invitation to return to help with the cheese making whenever I want.  I'm digging the life as a food-making apprentice.