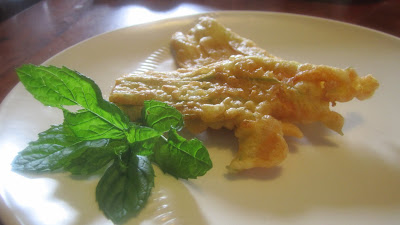 Let me preface this by saying that if I ever post a recipe that calls for frying something, it is because it is melt-in-your mouth, orgasmically good.

As with any good recipe, this goes with a bit of a story.  Zucchini blossoms are sold at vegetables markets in Italy all year round, but come in particular abundance in July.  Italian mammas everywhere fry up zucchini blossoms , where they get quickly gobbled up.   You know how in the US everyone with a garden tries to pawn off their zucchini on anyone they can find, because there are too many?  They don't have that problem here because they eat the blossoms before they get that far.

My upstairs neighbor, Betti, has an enviable garden.  It's huge by Italian standards, beautifully maintained, more kinds of produce than I can count, and produces in abundance.  She's a really nice older lady, short and somewhat round like all good Italian grandmothers.  She's a wizard in the garden and the kitchen, and the same person who I posted about this spring who taught me what I can eat in the cow-field.  Yesterday we were talking gardening (because I am taking what I call a 'farm girl' class... a 4 month class that teaches women farming techniques), and of course that led to kitchen talk.  She started talking about 'fiori di zucca' (zucchini flowers) and asked if I wanted any, and I admitted  that I didn't know how to fry them up properly.  She told me that she would show me the next day.  Today, while I was making some peach jam, she banged on my door and told me that when I was done with the jam it was time to learn how to fry zucchini flowers.  I tromped upstairs to her house and this is what I learned. 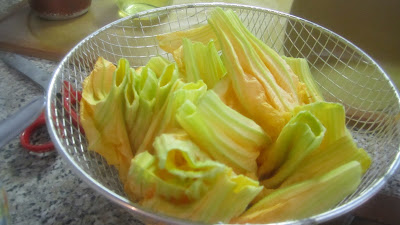 Pick zucchini blossoms in the early morning, while they are open.  Cut off the end where it was attached to the plant, Gently wash them and let them dry well.


Ingredients to have on hand:
2 eggs
whole milk
all purpose flour
salt
oil for frying (NOT olive)
fresh mint (optional)

I can't give you exact measurements because no one measures while making this.  So you will have to eyeball it!  Whisk eggs and milk together in a medium bowl. The milk is probably about a cup and looks like this: 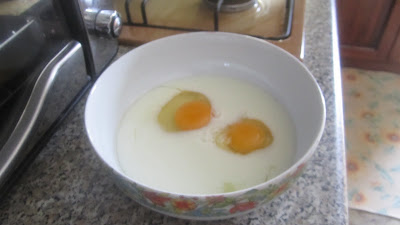 Add a large pinch of salt (maybe a half teaspoon), and start adding flour while you whisk.  If it starts to get lumpy, use a stick blender like Betti does to break up the lumps.  Add flour until it reaches the consistency of heavy cream or thin to regular pancake batter. 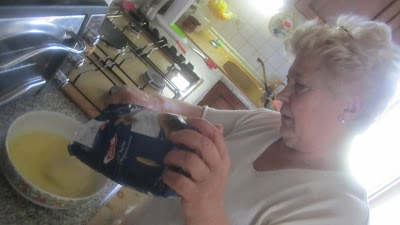 Betti says that adding finely chopped fresh mint is really good in the batter, though we didn't add it today, and that some people like to add a little baking powder to puff them up a bit more, but she doesn't think it is necessary.

Put a paper towel on a plate, and have more paper towels ready.  In a frying pan, put about a centimeter (No less! They will stick if you cut back on the oil) of oil, and heat up the oil until shimmering, and keep on low to medium-low heat.  Drag the clean, dry flowers through the batter with a fork, coating both sides and shaking it off a little bit after.  Gently place the battered flowers in the oil, turning after a minute or so.  You want them to become a very light golden color.  If they start to puff up, prick them with a fork.  After they look done (not brown!!!), remove from oil and place on the plate covered with the paper towel.  Press another paper towel on top to soak up the extra oil, and leave that paper there.  When you fry up the next batch, layer those on top, topped with another paper towel, and keep on like that until you are done. 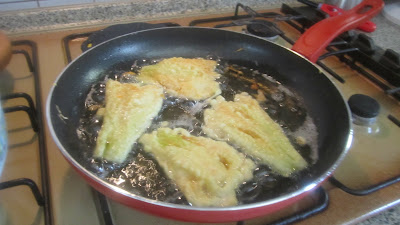 Eat immediately or save until later.  To reheat, put in the oven at a not too high temperature until heated through but haven't started to brown more.

A lower fat, non fried version:
Prepare everything the same except heat your oven to about 180 C (350 F), and in an ovensafe pan put a little bit of oil and heat the pan over your stovetop a little.  Add a handful of flour or two to the batter to make it like thick pancake batter.  Put the battered flowers in the pan, and put in the oven.  After a minute or two, flip them, and cook until done, about 5 or 10 minutes.  They won't get as crisp or golden as the fried ones, but I think I actually like them baked this way.


Another variation:
Stuff them first!  Mix together chopped mint and parsley, chopped prosciutto,  a beaten egg, grated parmasan, and bread crumbs and stuff the flowers before battering them.
Posted by Annie