The Story of Genepy the Alpine Bunny

Because it is Easter, I think it is time everyone knows the story of Genepy the Alpine Bunny. She is our household Easter bunny, so this post is in honor of her.

Within the first week or so of when I first moved to Italy in October 2009, I decided it was high time to get a rabbit. I had them growing up, and think they are pretty awesome pets. My friend Morena had to practically drag me away from a pet store flop-eared cutie with the promise of bringing me to get a rabbit from her friend, the Guardian of the Dam.

I'm serious. Try saying that without laughing, I dare you.

A few days later, after darkness had settled over the mountains, we drove an hour up twisty roads that snake their way through a remote part of the valley. The switchbacks were so sharp that they could bite their own butts. We went up, up, up, up, and over a narrow bridge that traversed a pretty enormous dam. Then down a teeny tiny road that had a cliff rising up on one side, and a deadly drop on the other instead of a guardrail. We stopped by a little cottage practically teetering on the edge of the dam, and this little blond, curly haired mountain man hopped out. We all loaded back in the car, driving along the cliff until he had us pull over on the side of the road. Armed with a flashlight and with us unprepared for the snow that crunched underfoot, The Guardian of the Dam lead us to a little shed that was overrun with adolescent bunnies, all skiddish because, I suspect, they knew their fate was to be a polenta topping in a nearby restaurant. I asked if he had any younger ones, and he led me to a trashcan.

Yes, a trashcan. A bunny trashcan.

It was one of the old metal bins from the 70's, turned on its side and cut in half longways. The Guardian opened it up, and it was filled with baby rabbits. It was pitch dark outside, so he kept fishing around until he found one of the little critters, and one by one pulled them out by their ears. It might sound horrible that he kept the babies in the trashcan, but it was actually fixed up very nicely, and was ideal for a birthing hutch. Anyhow, the babies kept thrashing about, until he pulled out a little bunny that seemed pretty happy to have the attention. The bunny was maybe a little less exotic looking than her fiesty siblings, but I knew she was a keeper. He asked if I was sure, and if I wanted a few more to go with it...but I was fine with the one. And I tried to not think about the fate of her siblings. We put her in a box, and headed back to the cottage on the precipice. The Guardian of the Dam fixed us some pasta, and freely poured strong local wine. I don't think he really believed that I wanted the rabbit as a pet, because to him it was so obviously food. I looked on the table and saw a bottle of genepy, a strong local liquor made from a high altitude Alpine herb. With a swig of the stuff to christen her, Genepy the Rabbit got her name.

She's been a great addition to the family, even if she has chewed through every electrical cord in the house. She made up for it by being a very well behaved ring bearer at our wedding. Right now she is loudly snoring in her cage, tired after an afternoon of chasing barn cats out of the yard. 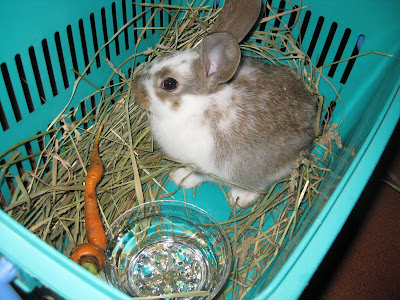 She started out pretty small, but she got big, fast. 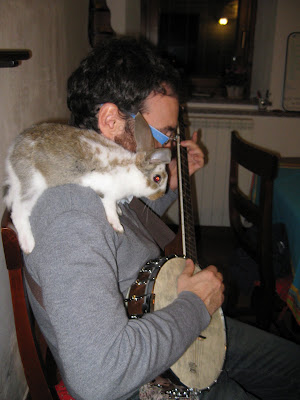 Maybe we should have name her Banjo? 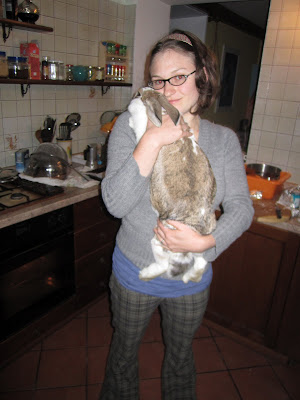 See how big she got? Don't worry, she's not that fat anymore. 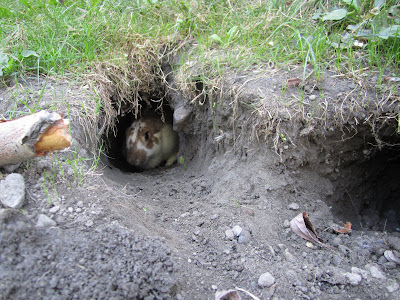