Ok, first comes food, because, well, I love food. Since the Palindrome party a week ago, I've been on a big of a baking kick. I baked...5? pies this week. And bagels. Yes, bagels! I think maybe when I am homesick I want to bake food that reminds me of home. Do you know they don't have bagels over here in Italy? They haven't even heard of them. So, like pie, I made it my mission this week to introduce the Italians to yet another delicious American baked good. I think next on my list will be peanut butter cookies and banana bread.

Here is the requested picture of the lemon cake pie. Now, it isn't such a beautiful looking pie, but it sure is delicious. Somehow, the ingredients separate in the oven so that there is a creme resembling lemon curd in pretty much every way (yum!), and on the top is a fluffy lemon cake. Gianluca has declared it is his favorite pie in the world, which he generally declares for every pie, but I think that he really means it for this one. 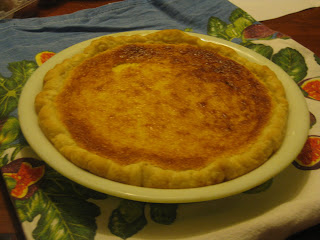 I also discovered a fantastic kind of cheese I didn't know about before in a local cheese shop. It is made from cow milk and apparently it spends some of its life maturing in hay. You are supposed to cook it up in a skillet.... i did this with wedges of it, warming it up on both sides until the outside began to caramelize and the inside was gooey and warm, and ate it with a nice salad, OHHH BOY was it good. 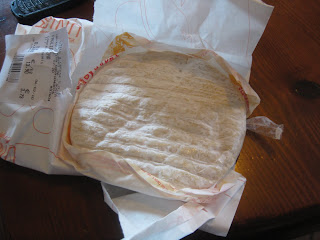 In that same cheese shop, I found some very tasty smoked scamorza. It's like a slightly aged, drier mozzarella than is usually found here, and it is shaped kind of like a pear and is amazing. It is also eaten after being cooked a little bit on both sides (after it is sliced). I made a tasty dinner of quinoa and vegetable stuffed peppers topped with some of this delicious cheese, and with a balsamic reduction. 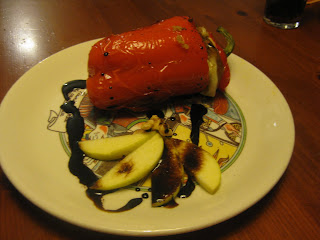 Now for the bagels! I, like most Americans, like bagels. However, I also grew up hearing stories from my grandfather about the bagels of his childhood in Queens, New York. He is a first generation American, with Orthodox Jew parents from Eastern Europe. Naturally they lived in a community of Jews after arriving in NYC, and when my grandaddy was a child he would go walk and get the bagels on a regular basis. Apparently there were old Russian guys making these bagels in underground bakeries, the same way these same men made them back in the Old World. And, from what I've heard, the bagels were absolutely divine, and my grandaddy says that he's never had bagels since that could remotely approach their quality. It seems that when these old bagel makers passed on, their secrets died with them. So it has become one of my grandaddy's current missions in life to rediscover their secrets and bring kickass bagels back to the world. I think he's got it down, and he recently gave the recipe to me. I made these divine little breads and my goodness, they were amazing. I took a bite, and closed my eyes in my Alpine kitchen, and for a moment felt like I was back home. 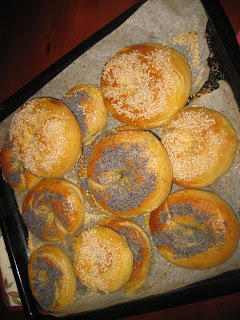 Here is the recipe, as my grandaddy wrote it... they aren't so difficult to make, and they are far better than anything you could possibly buy in a shop nowadays.

Add yeast to warm water and stir to dissolve
add oil, malt or sugar
add flour and salt and stir till comes away from side of bowl.
knead 12 to 15 minutes and add flour as needed, bagels do best with stiff dough
so work in flour till stiff. knead until dough is smooth
place dough in oiled bowl and let rise till doubled in warm place
Prepare oiled baking sheet with cornmeal
punch dough down. divide into 3 pieces and then each piece into 4 pieces (total of 12 pieces
roll each piece between fingers into a rope and then around fingers to produce donut shape.
place on baking sheet. spray lightly with oil and let rise till puffy ( 30 minutes+)

boiling
Place 2 to 3 quarts water in a pan and add one tablespoon barley malt or sugar bring water to boil
dunk 2 to 3 bagels at time into the water. time 30 seconds per side and remove with slotted spoon and place back on sheet. The longer they are in water the more chewy they will be.
brush with beaten egg and then add toppings (caraway seed, poppy seed, sesame seed, and a little kosher salt
bake at 450 degrees with steam (add ice cubes to pan on bottom of oven) for about 20 minutes then remove sheet
turn bagels over and bake for an additional 5 to 10 minutes till brown or till they appear done. 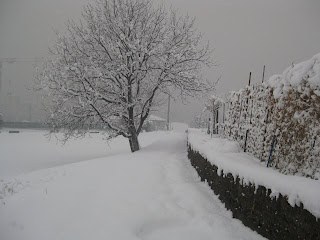 Then, the next morning (which would be yesterday) I woke up and looked out the bedroom window and had to cover my eyes immediately because it was so BRIGHT! Crystal clear blue skies, and the towering and sharply angled Alps were glistening as if made of diamonds. I've never seen anything so bright in my life, it was incredible. To see something so bright, and a clear blue sky, is amazing after weeks of the world looking entirely like I am viewing an old black and white film, or on a good day, with everything in muted sepia tones. No colors...don't get me wrong, it is simply gorgeous here, even when everything is in shades of white, black, gray, and the occasion brown tone. Beautiful in a devastatingly austere and overwhelming and gorgeous way. 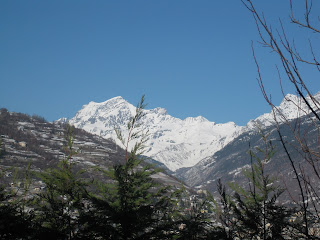 __________________________________
One of the things I love so much about living in another culture is just how different it can be sometimes. I know that sounds obvious, but it can really change your perspective on things. An experience I had yesterday was.... well, an experience. One I wasn't expecting. Because who expects to be sitting around with no pants on in a stranger's apartment with your family around you?

What led to this was an injured hip. Gianluca and I were on holiday in the Canary Islands a few weeks ago (an escape to warm weather!), and we decided to go for a run. I used to be quite the runner, but not in about 9 years, but I am still reasonably fit. I was enjoying the run so much that perhaps I overdid it (running 10 km or so), considering that I haven't gone on a run that long in... erm... not sure how many years, but closer to 10 than 5. And, you guessed it, I ended up injured. So, for the past two weeks I have been hobbling around like a little old lady who needs a hip replacement. I told Gianluca I wanted to go to a doctor, and he said, 'ok, I know someone we can go to.' I thought that meant a doctor, but no, no it wasn't. A few days ago I found out that this 'someone' was an ex-construction worker who has no medical degree, or any formal training, who you just go to in his apartment and he 'fixes' you. This sounded horribly suspicious to me, and being in the medical profession myself and not being someone to just trust anyone to try to fix me, I was NOT happy to hear that this, and not a doctor, was the plan.

But, Gianluca insisted, and we made an agreement that if this guy couldn't make me feel better (and I was certain he couldn't), I would then go to a normal doctor, with normal medical training. So, with this agreement, I reluctantly hobbled to Dominico the Healer's apartment on the outskirts of Aosta with Gianluca and his sister Valeria. A very short, very round, very gray haired man with very few teeth greeted us kindly at the door, along with his equally friendly wife. They had a smallish apartment with worn furnishings and and depictions of Jesus and various saints were peering down at us from the walls and cabinets, as the five of us crowded into the sitting room. He worked on Valeria first, to fix her leg circulation, and then it was my turn. In Italian he told me to take off my pants and lie down on the little couch. This seemed like a very particular, and somewhat sketchy, thing to in an older stranger's living room, but considering that there were five of us in the room, I figured I was safe. I did as he said, and he declared that my problem wasn't my hip, at all. It was my knee and my back. he poked at my knee and rubbed some blue stuff into it and said that there was a block in my knee and that it was now better. He then prodded at my lower back and said my back was crooked, and apparently he fixed that, too, though I didn't feel him to anything. He rubbed some more blue stuff on my leg and moved my leg around some, and said I was healed and if I took it easy for a couple of days, I'd be perfectly fine. I was inwardly rolling my eyes, thinking 'yeah, right. I've been in excrutiating pain for more than two weeks... no way that prodding and rubbing a little bit at my knee and back is going to make me feel better.' Then I stood up. And there was no pain. NO PAIN! He actually fixed me. He honest to God fixed me. I don't know how, but I can now walk without help, and even my back feels better. I can walk normally. On the walk back to the car, which I did unassisted, Gianluca explained to me that Dominico has a gift that is passed through his family's blood, every other generation. It has been this way for a long, long time. Dominico was the next in line for 'the gift' after his grandfather. The gift of being able to feel where people need help, to be able to heal with his hands, and a natural strong intuition about the human body. He learned healing techniques from his grandfather as well, but most of it he was just born with.

I'm a natural skeptic; I'm a physicist, a scientist. I don't generally believe things that I can't find proof of, and I am not the type of person to place the well being of my body into the hands of an old carpenter. But I'm telling you, the next time I have something wrong with me, I'm going to see Dominico first, because that man has some magic in him.
Posted by Annie