Palindrome Party...AKA I don't understand how Italians are so thin

I think this is a good time to write about the palindrome party. It was our dear friend Fabio's idea, and it took place on, you guessed it, a date that is a palindrome: 01/02/2010. And for the Americans out there who may think this is long overdue..... this would be Februrary 1, 2010 written how it is written over here in Europe.

So, this was a dinner party where we had our dinner in a palindrome format, since pretty much everything over here seems to involve food. Viva Italia! It went like this: Appetizer, first course, second course, dessert, dessert, second course, first course, appetizer. With corresponding wines to each course, of course! It was a potluck, even though they don't have a word for potluck over here. Actually, they don't have a lot of words that we have in English, which I've found to be frustrating at times, but the Italians make up for it by having extra-beautiful words, being beautiful, and having exemplary food and wine. 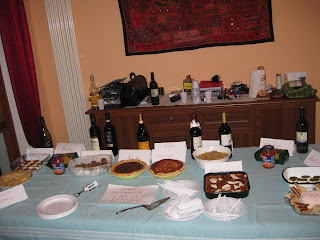 Anyhow, there were 15 or so of us, and I was responsible for bringing two pies. Pies can be a little bit tricky in the winter, if you want to use mainly seasonal ingredients, especially as I am not so much a fan of pies that fall into the chocolate, chess, fluffy, or meringue categories. Basically pies that mainly consist of sugar and fat don't really float my boat all that much. And am not the biggest fan of apple pies, either, unless cut with something more flavorful (unless they are killer apples, which are hard to find in February). Now, maybe you are thinking right now, 'damn, for a pie lover, this woman doesn't like pie very much.' I love pie. But I like making pies I can be proud of, and that I think are tasty and creative, even if I'm not the one who will be eating it. I think to make something taste good, you have to put love into it, and to put love into it, you need to love what you make. Suffice it to say, with my objection to all pies chocolate and fluffy, and in the middle of the winter, my options were limited. I ended up making a lemon cake pie and a 'mock pecan pie' which is really an oatmeal pie. However I didn't have any coconut in my pantry for the oatmeal pie, so it wasn't as good as it could be, but still quite tasty. The oatmeal pie recipe is also in my mom's pie cookbook I linked to yesterday.

So we proceeded by eating the forwards and backwards palindrome meal, all starting each new course and wine together. All the food was together on the table, and each course was labeled, so that people didn't get confused, and heaven forbid, eat out of order! It was a thoroughly Italian experience... a more-or-less random gathering of friends and strangers, for the purpose of eating, celebrating food, drinking, merriment and of course a lot of hand waving, and making lots of noise. A few people couldn't make it through and were thoroughly berated and I introduced the Italians to the concept of calling someone a 'chicken'. Apparently they call people a 'rabbit' (coniglio in Italian) for the same thing, although I don't think it is used to goad people on so much as in the US.

All in all it was yet another fun Italian party, and I am finding it easier to converse in Italian, now. I haven't ever taken Italian lessons (unless you count the two useless days of 'classes' I went to in town a few months ago, where we spent 3 hours reading a couple sentences I could already understand). I've just learned it by being around it and people being patient with me. I speak sort of like a young child, I think. My vocabulary isn't so big, I make funny mistakes, and I have pretty bad grammar. But, all around, I can make myself understood, and can understand others when they don't talk a million miles a minute. Viva Italia!

And now I leave you with a palindrome:
Straw? No, too stupid a fad; I put soot on warts