A summary of my culinary adventures of the past month

My mom, Barbara Swell, was teaching a week long cooking class at the John C. Campbell Folk School in Western NC. She was teaching her class about the similarities in the food cooked in the Alpine regions of Italy and in WNC (lucky for her, she's been able to learn a lot about Alpine food because of the direction my life has taken!), and thought it would be fun to cook polenta with the class. She also had the brilliant idea of having a 'Skype cooking lesson' with the Italians, and it ended up being a blast. We ended up having a polenta party where we cooked polenta over a fire, and made a number of traditional toppings, and did it all via Skype with the students at the Folk School. We were stirring the pot, explaining the history of polenta, eating cheese, drinking wine, and playing music. Basically a typical Wednesday night here in Aosta! The students really got a kick out of it. Here are some photos of the evening: 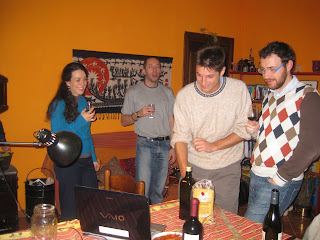 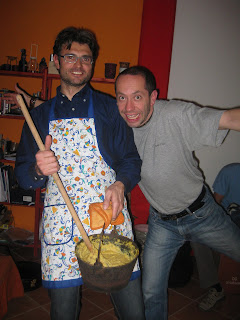 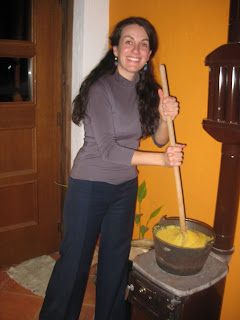 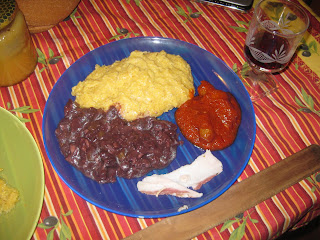 Next, I started to experiment with home made pasta. It's basically one egg for every 100 g of semolina flour, with a pinch of salt, and I like to throw in some dried or fresh herbs. I made a really tasty dish for Valentines Day (picture is below) with the home made herbed pasta where I mixed it with a butter saffron and blood orange sauce, broccoli, fresh mozzarella, and drizzled it with a balsamic reduction with a dollop of pesto on top. I also highly recommend the wines we drank with it, shown below. 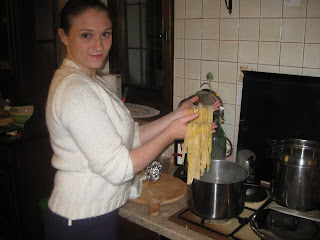 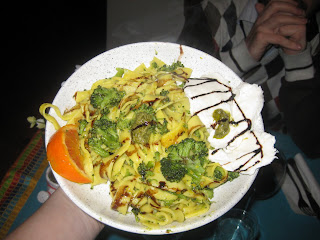 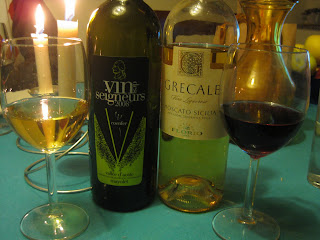 I continued with the lemon cake pie experiment, but wondered what would happen if I replaced the lemon juice and rind with blood orange juice and rind. While it was tasty, the chemistry just didn't work out quite right, as it didn't separate in to the cream and the cake like it usually does. It was kind of like a creamy cake instead, haha. I think that it needs more acidity than an orange can provide. 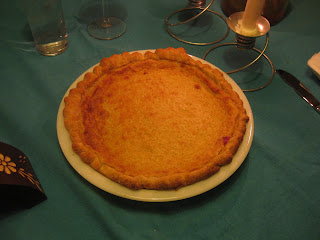 The next fun thing I made was lemon curd and crumpets. For some reason I had a craving for them, and obviously gave in! I had only tried making crumpets once before, and it didn't work out so well, partially because I have no crumpet rings. However, this time I had a brilliant solution: cookie cutters. I happen to have cookie cutters in the shape of gingerbread men and women, as well as a leaf, and those worked perfectly, and made them adorable, as well! The lemon curd was divine. The recipes I used can be found here for the lemon curd and here for the crumpets. Yum yum yum! Actually, I think I might have to make some more of both today.... 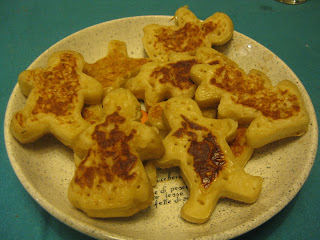 And finally, Genepy the bunny also likes to eat, and particularly likes carrots. Actually, she likes everything, but we think carrots are more healthy than beer and jelly beans (both of which she will steal from me given the opportunity) 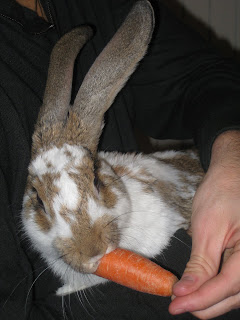