And the cheese making adventures continue!

On to ‘real’ cheeses… that is to say, those that involve more than separating curds from whey and squishing the curds together. Only slightly more involved, and way more fun.

Now, there are 2 different main ways to making mozzerella; one way takes two days, and the other takes less than an hour. My ’cheese making for idiots’ teaches the one hour method, although I am keen to explore the 2 day method, because apparently it keeps better.

My friend Denise came by to do this with me. She’s never made cheese, either, but she has childhood memories of her grandmother making simple cheeses in the kitchen, so she has an idea of what should be going on.

As I said in the previous post, I am trying my best to follow the directions to the letter. However, all of the Italians I talked to thought that the recipe called for too many additional ingredients (like calcium chloride and cultures). I think it is because normal American milk (which the book was written for) has been overly processed, whereas I have tasty raw milk at my disposal which apparently already has the appropriate cultures living in it. And upon some research, the calcium choloride is used to counteract the pasturization process, but it also helps to work with the cheese so that it is stretchier. So, I followed the ingredients. A gallon of raw milk, a 30% calcium choloride solution, citric acid, rennet, flaked salt. I had to approximate the measurents, since the book was written for Idiots in America, but I am an Idiot in Italia, where we use the metric system, and I have liter milk bottles. Yeah yeah I know I am a physicist, so I am capable to making exact conversions, but also because I am a physicist I am ok with making approximations.

Did you ever hear the joke that goes something like, Q: ‘why did the chicken cross the road?’, A (from a physicist): ‘Well, first we have to assume a spherical chicken….’.

Anyhow, it felt more like a fun science project to make mozzerella, like I was back in chem lab. Making solutions, dealing with acids, boiling stuff, etc. A combo of the rennet and the citric acid coagulated the milk, and the calcium chloride helps bind it together. The secret is to get out as much of the whey as possible from the cheese, and to keep it quite warm while working with it. First we kneaded it, then stretched it, like taffy, and tied it into lovely knots. It ended up being very very tasty, and much better than the normal mozzerlla that one can buy in the shops (which is still much better than American mozzerella). The only problem is that I think we overworked it, so that it was slightly tougher than it ideally should have been. Otherwise, it was quite perfect.


The raw milk, fresh from the vending machine: 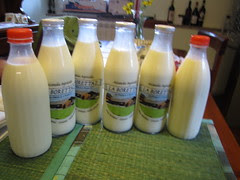 After heating the milk, adding the other ingredients, and letting it sit for 5 minutes, the curds clump themselves together! 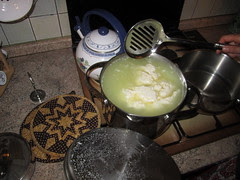 Kneading the cheese to expell liquid and create tasty layers 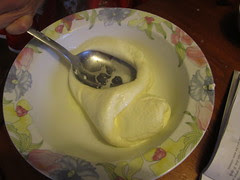 Operation: Mozzerella succeeded! Myself and Denise. 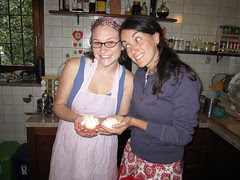 A closer look at our newest cheese 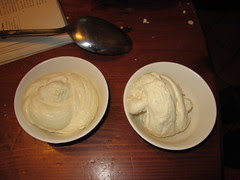 Ricotta is made using the seemingly useless byproduct from mozzerella: the whey, which is a kind of greenish liquid. It must be used right away, as it starts to go bad within a few hours. We heating the whey up to the right temperature, added 2 liters of raw milk, got it back up to the previous temperature, and then added 6 Tbs of fresh lemon juice to once again coagulate it. Drained it in a cheese cloth, folded in some flaked salt, and let it drain. It ended up being extraordinarily good. I generally don’t like ricotta whatsoever, but this one was fantastic. It was creamy, and had a good flavor.


Making ricotta... pouring the curds and whey into the cheesecloth 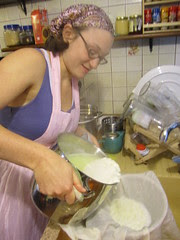 After it drains, we have ricotta! Seras. What the heck is seras?! you are probably wondering. It is the final dairy byproduct of the whey, and apparently it is a word in the regional dialect, and not the official word. Absolutely no one here that I have talked to know what it is called outside of Valle d’Aosta, but that is what they call it here. It involves adding a fair amount of apple cider vinegar to the hot whey after the ricotta is made, and waiting until all of the curds possible separate out. At first we thought it didn’t work, until we realized that you really need a huge amount of whey to make a decent amount of seras. After pouring all of this through the cheese cloth and letting it drain, we got about a tablespoon of very fine, creamy, and grayish cheese out of it. To be honest, it kind of scared me (I hate vinegar, and it spelled to vinegary to me… plus grey cheese? Ew!), but my cheese-hating husband loved it.

The next step in the cheese adventures is to start making cheeses that need to be aged a bit. The only thing I am really worried about now is that the milk from the cows around here is so particular, which is why they only make a couple kinds of cheese around here (primarily Fontina and Toma), which have very particular flavors. The raw milk already tastes quite a bit like Fontina, so every cheese I make also tastes a bit like Fontina. I might have to hunt down some ‘normal’ cows that aren’t used to make the local strong cheeses.

bread from a french market, garden tomatoes and basil, the mozzerella we just made, with a balsamic reduction 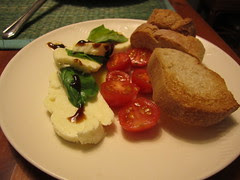