I know that this is so 2006, and it's been written about probably ten thousand times, but it's so good and simple that I must also contribute to the plethora of blog posts about this magnificent bread.

No-knead bread hit the mainstream audience in November 2006 with this article in the NY Times.  It was a baking sensation that overtook the nation, as much as home baked goods can.  Foodies everywhere were talking about it.  I heard about it, and was curious, but never  tried it or made it until this past week.  To put it simply, it blew me away and I'm obsessed with it.  I'm also in the process of making my third loaf in one week!  I'm not someone who is generally a 'bread eater', as most bread isn't worth eating in my opinion.  I am in love with the wonderful fermented breads made in France, but that's about it.  My bread's got to be fermented, take multiple days to make, have a chewy crumb and rustic thick crust,  or I generally won't touch it.  However, I usually don't take the time to make this sort of bread at home, so I usually go breadless.  Unfortunately, in this part of Italy, the bread generally...well, sucks.  Italians, at least around here, treat bread simply as a utensil to mop up the juice on their plates and to push food on their forks.

I think the no-knead revolution has just hit Italy, though.  It's similar to a ciabatta, but possibly tastier.  It is also easier to make.  Last night we had a small dinner party at our house, and the three guests gobbled up the whole loaf and all requested the recipe, which I then had to translate into the metric system.

It's an extraordinarily simple process, and the only important piece of kitchen equipment is something like a Le Creuset, or any other heavy pot (cast iron, terra cotta, etc) with a good lid. However, since we will be heating it up to a high temp, to be on the safe side you might want to unscrew your lid handle and stuff the hole with a piece of aluminum.

You add your 4 ingredients together in a big bowl:
3 cups flour
1 1/4 tsp salt
1/4 tsp yeast
1 5/8 cups water
(later you will need a little corn meal, wheat bran, polenta, or something like this)

It will be a wet, shaggy mess.  Then you cover it, leave it in a warm-ish place, and let it sit undisturbed for about 18 hours.  It will grow into a significantly larger wet mess, dotted with bubbles, emitting a nice yeasty smell even though hardly any yeast is used. 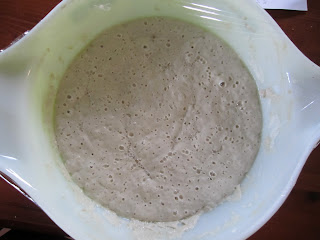 After the 18 or so hours are up and it looks all bubbly and ooey gooey like the photo above, flour a work surface and gently pour your dough onto it.  Sprinkle dough with a little flour, and fold it in on itself one or two times.  Cover and let it sit for 15 minutes.

Very quickly form it into a ball, only using enough flour to keep it from sticking to your fingers.  However, I found that it doesn't want to be a ball, it wants to be a sticky blog.  Anyhow, make it as ball like as possible, and place the goopy mess on a tea towel (or as we say in the US, dish towel, although it doesn't sound as nice) that has been coated with your cornmeal/polenta/wheat bran/something like that, UGLY side down.  Or, shall I say, uglier side down.  Sprinkle some more of whatever you used (l like using mill ground cornmeal or polenta) and cover with another tea towel.  Leave it for 2 hours.  It'll rise some, as bread is prone to do.

30 minutes before your rise is up (which is 1 1/2 hours after it started on its second rise), stick your pot with its lid on in an oven preheated to 450 degrees Fahrenheit.

CAREFULLY take it out after that time is up, and dump your dough into the hot pot so that it is 'ugly side up' AKA seam side up.  Trust me, it will make end up beautiful.  Wiggle the pot back and forth a little to make sure dough gets evenly distributed.  Cover with the lid and stick it in the oven for 30 minutes.  Then, take off the lid and cook for another 15 minutes or so until it is a lovely golden brown.  Dump it out of your pot and let it cool on a wire rack before eating.

It is delish.  Now it is time for me to prepare batch #3 for its second rising! 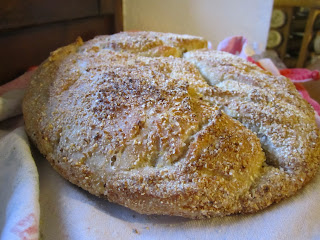 See how lovely it is?  It's turning me into a bread-lover, and will probably make me fat from carb-overload 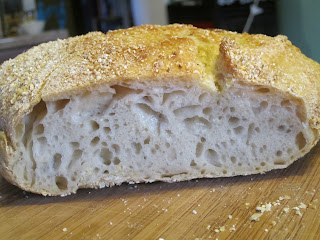 Nice crumb inside resulting from the day of letting it ferment... yum!


The reason you need this pot is so that bread has a shape (otherwise it will turn into a long flat blob), and most importantly, to develop a good crust.  Because the dough is so moist, when it cooks it gives off a lot of steam.  Cooking it in a hot, lidded pot is basically like cooking it in a tiny steam-injected oven, which means that you get a fantastic texture and taste out of your crust.
Posted by Annie

Email ThisBlogThis!Share to TwitterShare to FacebookShare to Pinterest
Labels: recipes