In addition to making those other tasty cheeses in previous posts (especially queso fresco...mmmm!), I've been working on two new cheeses!

This is basically a farmer-style cheese, made into to little rounds.  Before trying them, I thought 'TOMINI!', but alas they were only tomini in form, although they were still tasty.  Tomini are a common cheese fresh around here, and I'm trying to find a recipe so I can make them, too.

Anyhow, this was my first cheese made using cultures.  For how much cheese is made around here, no one seems to have a clue as to where I can get cultures.  I think that the local cheese makers probably have their own cultures that they propagate, and most folks just don't make cheese at home anymore.  So, although I live in the land of cheese, I ordered my cheese making cultures from the UK.

For this cheese, the ingredients were milk, a mesophilic (low temp) culture or buttermilk (which doesn't exist here), rennet, and salt.  The molds were made out of paper cups with holes punched in them, and it was pressed with other paper cups filled with water. 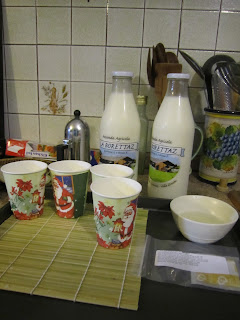 I was supposed to gradually heat the milk in a simmering double boiler removed from heat, but as I pasteurized the raw milk first and was too impatient to cool it and then reheat it, I just let it cool down to the right temperature. 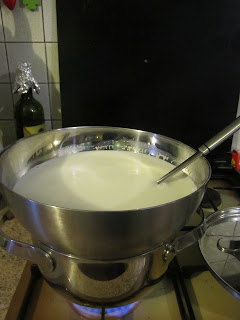 I added the mesophilic starter, and had to let it sit for an hour.  It started smelling nice and cheesy after that! Then, I added the rennet and let it sit for another hour.  Then, the miracle happened.  So, SO cool.  The milk turned into a gel-like solid.  As if the whole thing turned to jell-o.  It was pretty darn awesome.  I cut the curd with a whisk, heated them back up, drained, salted, and then divided the curds up between the cups. I pressed the cheeses, turned them (hard to get those darn things out!!!), keeped pressing, turned, and left the little cheesy suckers overnight. 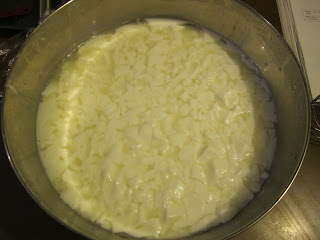 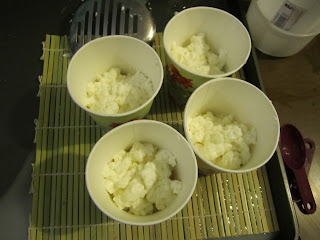 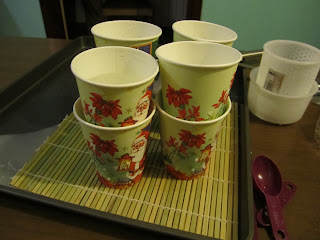 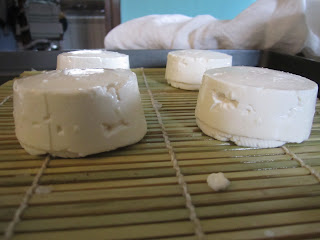 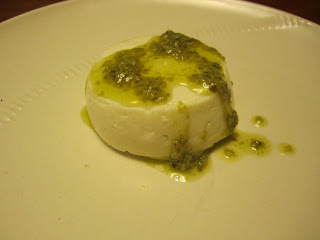 Ricotta Salata is basically pressed, molded, salted, and slightly aged ricotta.  There are different ways to make ricotta... directly from the whey after making mozzarella, milk added to whey, or just from milk.  Add acid, and you have ricotta curd, and strain in a cheesecloth.  Then you pack it all into a mold (I was lucky! I finally found one... the last one for sale!...in a farm shop at the bottom of my driveway), and press it.  I don't have real cheese presses yet, so I had to improvise. 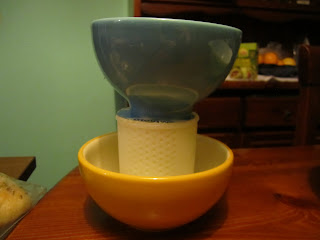 See? Lovely cheese in it's mold.  I made the mistake of not sticking in in with some cheesecloth the first time, and it got stuck, so I learned my lesson and it's now living in cheesecloth in the mold.  As with the other molded cheese, it needs to be flipped in the mold a few times that first day. 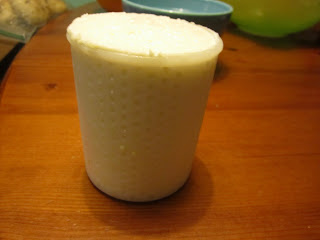 Out of the mold! Isn't is beautiful?  This is before it's salted every day for a week, and then aged for a month.  I just finished the last salt rub (I see why it is called salata, as it will be SALTY) yesterday, and need to wait for 1 to 3 weeks more before diggin' in.  I'll let you know how it turns out! 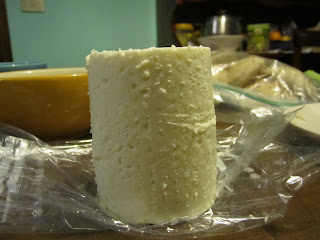 In  other, very VERY exciting news... I spoke with Reuben the Cheesemaker yesterday at the Mistletoe Festival.  He makes fantastic goat cheese.  I've been to his place at the top of the mountain a couple of times before, and actually was there when a goat went into labor and gave birth, which was incredible.  He said that not only can I buy goat milk from him, come February when the goats give birth again, but he'll teach me to make cheese!  They are only making cheese for 10 more days until spring, so I will be going up there soon, to apprentice with a fantastic cheese maker.
Posted by Annie